Parenting is not being your child’s friend.

Recently, I have noticed more and more parents acting less as the parent and trying to be more like a friend to their kids. They want them to see them as a cool parent, nice parent, or the parent who does not care. I feel that these are mistakes many parents are making. Don’t get me wrong, your child could see you as a friend figure but a parent should act like the parent. Being their friend, where you don’t have to be the one in charge or discipline them when they do something wrong, is where many issues begin. Your child needs structure and discipline. This teaches them respect, responsibility and helps them deal with the challenges that life brings. Kids need guidance, direction, and they need to learn to respect others. The way to do this is by having someone in their life who is an authority figure, someone for them to look up to, not as a friend but a parent figure. 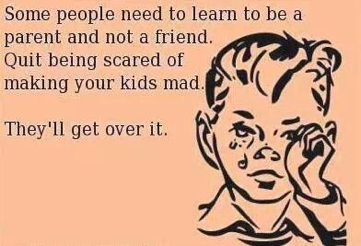 For 8 years, I helped run a Specialized Therapeutic Group Home, where I dealt with misbehaved youths who were known to not follow the rules, did not know how to respect authority figures, and were known to run away because they did not want structure in their life. The home was set up with different levels which taught them structure, introduced them to rules and communication by using words to get what they wanted. What really made the program work was the staff, including myself, being consistent, firm, and speaking to the kids in a respectful manner. Most importantly, was not treating them as a friend but letting them see me as a caring and respectful individual who was there for them. In a sense they saw me as a parent figure, the authority of the program. These are kids who were extremely defiant towards structure, discipline and following rules. After a while, they noticed the structure of the program did not change and the consistency with them continued. They began to get on board and follow the rules of the program, not because I became their friend but because I was the authority figure who stood by their side in good times and in bad. Just like a parent, they hated me and liked me but most importantly they respected me and the program.

Being a parent is not easy, it is hard to hear when your child tells you “you are the worst parent”, “I hate you” or “my friend’s parent is a better parent than you”. We never want to hear these words, but in my opinion if you hear these phrases then you must be doing something right. As long as you are providing for your children, feeding them, being consistent with the rules of the house, and disciplining them when needed, your child will understand when they get older that what you were doing was teaching them to be respectful and a better person in life. 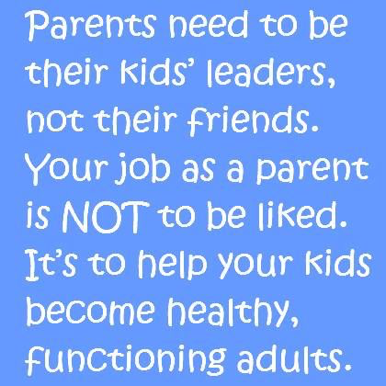 One thing that I really learned by running the program is that children crave boundaries, structure, and having someone tell them the difference between right and wrong. This is something that is lost when a parent only acts like a friend to their child because when you’re friends with them they start seeing you as an equal. You think they respect you, but in reality they just feel comfortable enough with you to the point that they think it’s ok to talk back, argue, break “rules,” and disrespect you. Kids need someone in charge to direct them in the right direction. It might seem like an endless difficult task, but in the long run you will see them grow into respectable adults and one day they will thank you for it.
Parenting is not giving your child everything they want.

OVER TO YOU:
As a parent are you in charge of the house or do you feel like your kids run your house?
If you’re in charge what tips can you give others to help them take control of their house too?